Happy weekend folks! For today’s excerpt, asked readers to submit the scene they wanted to see. After drawing the ideas randomly, the winner is scene is a fight scene from A Knight’s Victory...

This is from the tournament, where the hero Michael must win at all costs in order to protect the heroine, Elena. Here he is participating in the joust along with his horse Black. 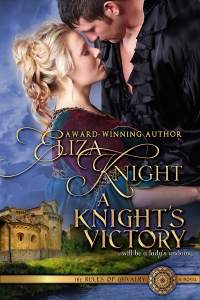 His opponent immediately took off, charging toward him. Michael didn’t budge. Instead he counted, one, two, three, and then spurred Black onward. Thrusting his body forward, he leaned a little to the left and lifted his lance into place. As his opponent neared, he leaned back and then, at the last possible moment, he thrust his body forward again. The man didn’t even have time to react before Michael was crashing into him.

BOOK TWO: The Rules of Chivalry

A knight’s victory will be the lady’s undoing…

Sir Michael Devereux has fallen for his childhood friend, Lady Elena. In return she has also given him her heart. However their love is not to be. Lady Elena is whisked from their homeland of Wexford, Ireland to marry the malicious Earl of Kent in England.

Suffering greatly Elena pleas for Michael to come and be her savior. At long last an opportunity arises in the form of a tournament. Winner becomes Kent’s Captain of the Guard—and closer to the Lady Elena.

But with victory comes tragedy… When stealing kisses in the dark leads to something more, and the sinister ambitions of people in their midst threatens their safety, Michael and Elena will have to make a choice. That choice could mean life or death and has them asking, does love really conquer all?

Check out the first book in the series!

Book One: A Lady’s Charade

Available now from Amazon and B&N

Available now from Amazon and B&N!